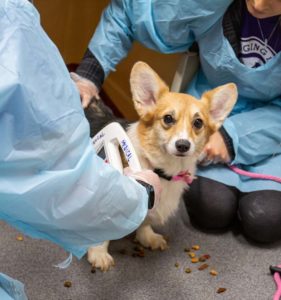 Officials at the Animal Rescue League of Iowa say 42 dogs and puppies have been removed from an unlicensed breeder in southeast Iowa.

Joe Stafford, director of animal services at the organization, said the smell of urine was overpowering. “It was just deplorable conditions,” Stafford said, ” really hard to describe, I mean an ammonia level that would burn your eyes and just made it very, very difficult for the rescue team to breathe inside the home.”

According to a news release from the Animal Rescue League, the dogs ranged in size from Great Danes to Corgis and they were crammed into filthy cages stacked on top of each other inside a home in Lee County, near the town of Argyle.

“Wire cages that were far, far too small for them,” Stafford said, “Many of them were soaked in urine, covered in feces and you can imagine a large number of dogs inside a small, residential home — what that would look like and smell like.”

The dogs are thin, with rotten teeth, and were suffering from fleas infestations. Stafford said Lee County authorities are conducting an investigation and will determine if charges are filed. Most of the dogs are now being cared for at the Animal Rescue League’s facility in Des Moines, but female dogs with nursing puppies have been placed in foster homes.

“We rely on the support of our constituents and people who are animal lovers to do this work,” Stafford said, “and if somebody has some extra funds or some time to volunteer, whatever they could do to help out.”

More than three dozen hamsters were also rescued from cages in the Lee County home and have been cleaned up, evaluated and fed and are recovering at the Animal Rescue League facility.